The Pre-Order is upon us!

So yeah! Songs of the Northlands may have run over its creative window a little bit (by about two weeks, really), but since I was able to pass out the stories to my beta readers over time, I was able to begin revision on schedule, and the pre-order for the Kindle edition started on September 17th! According to Amazon, it was the 18th, but that’s only because they took a bit to approve the pre-order… no wonder, considering the fact that this time around, I’ve got a new Tolkien book, a Drizzt novel, and a George R.R. Martin novel in the Hot New Releases list to content with. 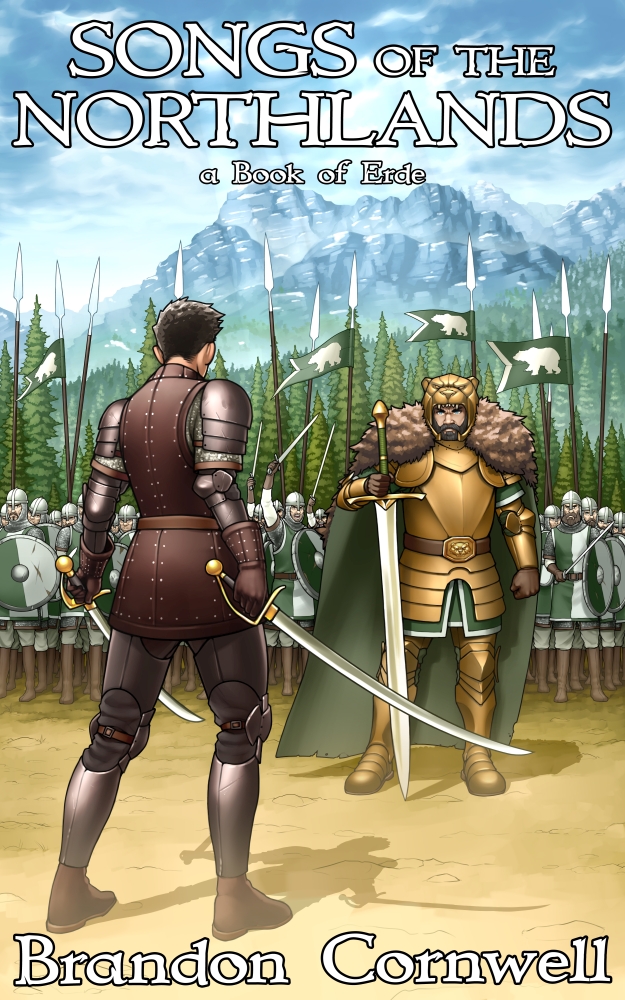 I am thrilled to say that I have decided to go back to my original cover artist – my brother, Ray Cornwell – for my upcoming novels! While I love and appreciate the covers created by the talented artist Alexandre Rito at Podium Publishing, there’s just something enchanting about my brother’s art that captures the soul of my writing. He has been with me for every step of the way, acting as a sounding board for many of my ideas while I developed the world of Erde, and so has an unrivaled sense of my characters and brings them to life with his superb skills. As soon as we can find the time to collaborate, we will be working together to re-create the covers for Thunderbolt and Storm’s Break, as well as the upcoming omnibus edition of the Warrior’s Trilogy. Keep your eyes open!

I’ve got one more, last-second read through I want to do for Songs of the Northlands before October 1st rolls around, since I am quite painfully aware that my skills as a storyteller trump my skills as an editor, but the novel will be released on schedule, which seems like a miracle after how busy this summer has been! Five kids home, setting up and maintaining an above-ground swimming pool, a trip to Spain, France and Italy, starting and maintaining a small berry garden, rebuilding a deck for my grandmother, as well as my better half having multiple business trips, and I’ll admit to looking forward to slowing down for the cooler seasons. I’ve got a few woodworking projects I have in mind, and a newly cleared out and cleaned up woodshop in which to do them.

Slowing down… hah! I’ve got another novel to write! Volume IV of the Dynasty of Storms saga is next on the list, following the young mage Amethyst through her trials before and during the Warrior’s Trilogy. Here’s hoping I can hammer out Snowfall in six months!

This site uses Akismet to reduce spam. Learn how your comment data is processed.